In the spirit of this blog, I’m going to post a link to my other great book review of Deck the Malls with Purple Peacocks (book to be found at http://amzn.to/2AuArxQ )

Here’s the link to the Readers’ Favorite review, which is making me have happy feet!  https://readersfavorite.com/book-review/deck-the-malls-with-purple-peacocks

“Amy Gettinger’s Deck the Malls with Purple Peacocks has romance and comedy and it even has more Christmas cheer than most would ever dream of enjoying at this time of the year, but Gettinger makes it all work beautifully. She does all this while writing a moving and true-to-life story about a young woman whose eleven years working double shifts and paying taxes seem to mean nothing in today’s anti-immigrant fueled America. Gettinger exposes the irony of Quito’s Cuban ancestry making him of more value politically than Aracely with her Mexican heritage, and Aracely’s victimization by the companies that she works for rings sadly true. That said, Deck the Malls with Purple Peacocks is a marvelous romp! I hadn’t read the first book in the series, but had no problem getting involved in the story and am looking forward to backtracking to the first book, Alice in Monologue Land. The Venus Warriors are prodigious and funny — and exactly who I’d want on my side if I’m ever in hot water. Deck the Malls with Purple Peacocks is most highly recommended.” ~ Jack Magnus for Readers’ Favorite

Can you see me grinning from ear to ear? Have a merry mid-December! 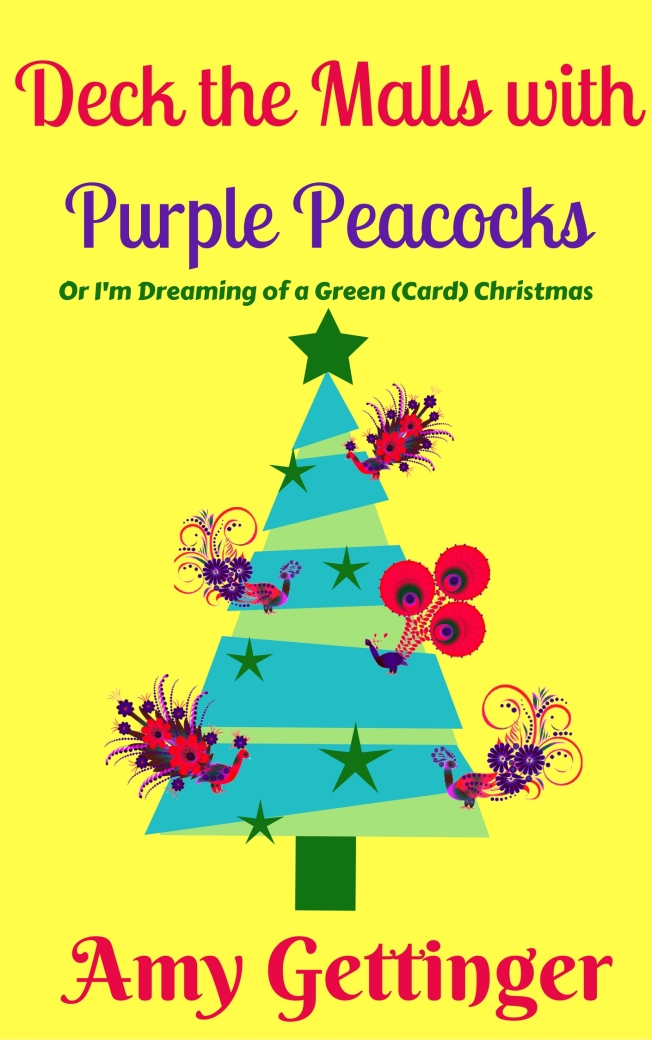 Below, find the amazing and wonderful review for Alice in Monologue Land http://www.amazon.com/Alice-Monologue-Land-Amy-Gettinger-ebook/dp/B00VVK8NFM that Readers’ Favorite said via email last summer that they had found no one to do. Guess this lovely lady did do a review in September, after all, and the email about it to me got lost in political spam. Well, I didn’t go hunting for Alice’s page on Readers’ Favorite until today, when I thought I’d bite the bullet and pay for a review. But to my surprise, here it is! A freebie! 5 Whole Stars!

“Fun, fun, fun! That’s definitely how I would describe Alice in Monologue Land by author Amy Gettinger. following the story of Alice Chalmers, adjunct English professor, single mom, and basically all around stressed out woman. And when she’s ‘encouraged’ or, more aptly, ‘required’ to read a part in her campus’ upcoming “Venus Monologues,” things in her carefully orchestrated life start to fall apart. A coveted job opens up, but Alice is certain that the conservative selection committee would not appreciate her participation in the Venus Monologues. Her Dean pretty much forces her to continue with her participation though, and, resigned, she does so. It’s at practice for the monologues, that she meets the “Venus Warriors,” an interesting group of fearless college women who aren’t afraid to discuss or do just about anything. Throw in some special attention from not one, but three men interested in her and the fact that some of her female students have gone missing, and you’ve got yourself one heck of wild ride of a book.

I so enjoyed Alice in Monologue Land. This was an exceptional read and I read it from cover to cover in just a few days. Author Amy Gettinger has done a fantastic job in creating characters that are funny, intriguing and exciting, sometimes all at once. The story is truly laugh out loud funny at times, and in one scene I actually laughed until I had tears in my eyes. Alice in Monologue Land is a book that would be enjoyed by any reader who enjoys a book with a fun female lead, a book with a little mystery, a little suspense and a little romance all wrapped in one, or just a plain good book. I certainly hope that Amy Gettinger is working on her next novel in this same vein, because I, for one, will be eagerly waiting to read it!”

I am overjoyed! Thanks, Tracy, for reading and reviewing!!! Alice was meant for just your type of audience!

Me in my wildest dreams

So this week, I posted a bunch of Chick Lit Chat HQ #chicklitmay #chicklitreads #chicklitmonth related blog posts, two with contests and prizes–got a lot of blog exposure, and some exposure for Roll with the Punches, my literary (cough) okay, humorous fiction baby.

And I wrote a new short story to include in another free (promotional) anthology for summer, featuring red bikinis. Good story–coming together well. I had nasty arm and back pain from too much computer use. Still do.

I put Roll with the Punches on sale for 99 cents–> http://www.amazon.com/Roll-Punches-Roller-Alzheimers-Plagiarism-ebook/dp/B00V5B3W12

And I FB posted and tweeted and blogged about that, forgetting to include the buy link to Amazon. (Thanks, Paul De Lancey for catching that.) Then I included the buy link and it either wouldn’t stay a full link or it blew away the sale art. I can’t figure out how to post using my own (well, not my own–I begged it at the last minute from Karan Eleni at Bliss Book Promotions–bless her wonderful, giant heart) graphic for the book being on sale WITH the Amazon link, which wants to post my book’s cover art. The two pix battled it out, and Amazon won.

I am also being featured at Dianne Bylo’s awesome Tome Tender Book Blog–go here–> http://tometender.blogspot.com/2015/05/spotlight-on-amy-gettinger-her-fun.html?zx=cb46d30f863b4393. She is sooooo generous with her time and her great reviews. Love her! She makes my spotlight look really fun, and she’s just a peach.

Fools Rush In, the April Fools Day free (promotional) anthology that I have a piece in has reached over 30,000 people–many, many downloads. Should translate to sales, right?

I got a wonderful Amazon review from the awesome Karin Gillespie, whose Bottom Dollar books I adore. http://www.amazon.com/Karin-Gillespie/e/B001HCVXHY/ref=sr_ntt_srch_lnk_1?qid=1431904518&sr=1-1

I did a quick promo with B Knights on Fiverr. Supposed to bring many sales!!! Yeah! But I must have done something wrong. Seriously.

I have great support! I do! My husband, my friends! Dianne Bylo! The incomparable Karan Eleni! Karin Gillespie! The large and very supportive Chick Lit Chat community!!!

Yeah, I was in tears yesterday.

Then, I dug into the email I missed when I was mid-cold virus two weeks ago and found this Reader’s Favorite 5-star review–which apparently can’t be posted on Amazon, but which is pretty cool.

“Roll with the Punches: A Story of Roller Derby, Alzheimer’s and Plagiarism is a chick lit novel written by Amy Gettinger. Rhonda’s relatively carefree existence gets entirely turned upside down in almost no time at all. The librarian and aspiring novelist finds out that the novel she’s been writing for over a year, and spent a full month finishing, has been plagiarized by the mysterious, best-selling author, Reynold Jackson. To make it even more painful a loss, the book’s a runaway bestseller and the fact that she had shopped the book to a number of agents means her reputation is totally shot. Things are even worse at home. Monica, the older sister who took care of things relative to their parents, has emigrated to Australia, her mother’s in the hospital and her father is acting very oddly.

So that made my freaking week. I really like Jack Magnus now. He gets me. He really gets me. I feel like Sally Field at the Oscars in 1985. If he ever needs a place to stay in SoCal, no problem. This is it.

And now you know how old I am.

I am privileged this week to be featured on Dianne Bylo’s fabulous Tome Tender Book Blog. Dianne is a top-500 reviewer on Amazon and a VORACIOUS reader!!! She’s graciously offered to review and feature both of my books (plus the 2 anthologies) this week!!! What a fun ride! Thanks so much, Dianne!!!

And here’s her review of Alice in Monologue Land.

“Practice your snort laugh, you are going to need it and its okay if someone hears you, it means another author has done their job! Amy Gettinger has a story to tell and it’s one for regular women, and about regular women, because seriously, sometimes guys just don’t get many of a female’s issues or stumbling blocks in life. Meet Alice, single mom, struggling to make ends meet, be in three places at one time and now, a speaker for a unique women’s literary event. And she is trying to find a way out of it, desperately, because, really who wants to read a poem or anything about female body parts. Alice isn’t a groundbreaker, she’s good with not being up close and personal with her, um, you know…and the oppression women have felt over being comfortable with their bodies? Can’t call her a groundbreaker there, either.

Pretty sure you have figured out this is not drama, although Amy Gettinger does make some dramatic scenes come to life with a bit of mystery and edgy darkness. Ms. Gettinger is here to entertain and she succeeds admirably, from page one as she takes us through the chaotic life that belongs to her main character, Alice. From dark parking lots to students who are more than they seem, to pythons giving “hugs,” one must admire the character Alice or pray for her survival.
A fun-loving read, perfect to bring sunshine to even the cloudiest day, Ms. Gettinger lets us know it is okay to laugh at ourselves, just in case we can identify with Alice and that reading less than lofty tomes brings a certain sparkle and shine to the literary world. I might suggest you hang on tight, this tale has more spins than a tilt-a-whirl.”

I am happy dancing all day today!!! Hope you’ll go over and check out her blog post–you can win gift cards!!!

On March 24, I published my first novel, Roll With The Punches. It took 10 years to write and rewrite and rewrite and slice back and reconfigure and rewrite. Finally, this month, I got the courage to release it to the wild, sort of like those red-tailed hawks and Cooper’s hawks and kestrels and barn owls and great horned owls we released back into the wild after months of rehab with the OC Bird of Prey Center this week. Then I got crazy and released my second book, Alice in Monologue Land. It had taken 12 years to accomplish to my satisfaction. Twelve years of writing–learning to write, getting the words just so, so they tell the story I want and flow and are funny. Problem with my books is they have never flown before like those raptors, and I now feel like a true Helicopter Mom, trying to get them to fly and then teach them how to stay aloft.

I got a wonderful book review right out of the gate from my long-time best friend, Lenore, who had read the book a while back and enjoyed it. Then many dry days went by until my sister read the book and wrote quite a glowing review, which I really had not expected. (Thank you, Mary!) Yay! 2 great reviews! I was happy. But according to the Powers Of Book Promotion, 2 is not enough. I must find more, many more. All wonderful, all valid reviews. So I’ve begged and pleaded for days for more reviews. I’ve walked the streets of Orange County, hawking books and begging tourists and passing fat men for reviews. (LOL, no. I’ve learned to tweet and pimp out the book something outrageous on Facebook–which is just as bad. And I must say tweeting is for the birds and liking for like’s sake is just weird.)

So yesterday, I checked my FB as usual, which is now taking all day long, with all the writers’ sites I’ve joined. I had requested a review from a top-500 Amazon reviewer, Dianne at Tome Tender Blog. And there it was!! My review!! My big, fat, awesome book review!!! I was thrilled! I am thrilled! Here is a link to my big, fat awesome book review

for my big, fat awesome book!!