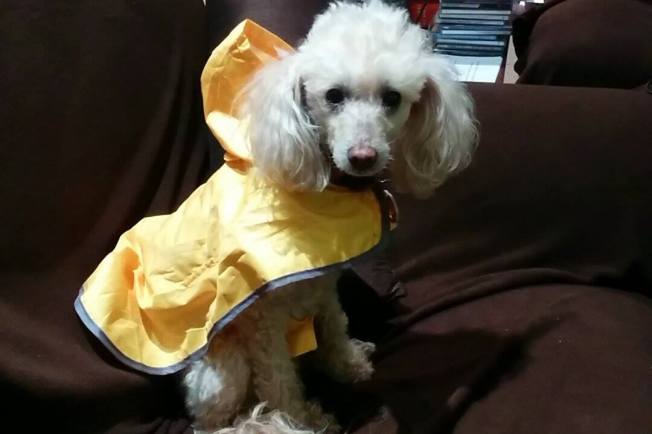 “I hate this raincoat. Take it off me now.”

My other dog is also a poodle–apricot and half an inch larger than Ronnie in all directions. Her name is Taffy, though I insist that her full name is Princess Taffelina of Poodledom. I call her Lina and Ickle Puppy Girl and Little and Baby and Baby Girl and Puppy Wuppy and Punkin Brewster. She is a love. She shadows me whenever I am home and guards the house when I am not. She warbles a doggy warning whenever anyone approaches the door. The proverbial canine door bell.

We got her in November 2004. I was feeling that need for another dog, like a woman who needs another kid. I just knew there was a perfect dog out there for me, one that would calm Ronnie down from his current anti-dog perspective. (See my previous post about Dog 1.) Ronnie was so hard to walk. Whenever he met another dog, he strained at the leash and yapped bloody murder. Could this be helped by creating a pack for him?

That year, our family–Peter, me and the boys–went to the LA County Art Museum. There happened to be a dog adoption event outside when we exited. We looked at all the cute dogs, and a small, curly, white dog named George caught my attention. I took the contact info for George and called about him the next day, but the lady said, “Oh, no. You don’t want George. He poops in his water bowl.”

She was right. I didn’t want George.

She directed us to a large no-kill shelter in Los Angeles, where we trooped in with Ronnie in tow the following weekend, after I told my husband we were getting a second dog. Actually, I said we were looking, but he knew it was inevitable. We arrived at said shelter, and all the dogs they presented to us just barked their little noggins off when they saw Ronnie. We gave up on their dogs, and they sent us to another no-kill shelter down the road, in Topanga Canyon. I walked in the office there, holding Ronnie high over my head. “Got anything like this?” I asked. The lady said blithely, “Oh, yeah. One came in yesterday. I’ll go get her.” Sort of like the dog was a piece of merchandise they got shipments of often.

That day, we all met Taffy, who had been found shivering by the freeway, kept by people for a short time, then brought to the shelter with her derpy name attached. She was an introverted, matted mess, who had never been groomed (or maybe even bathed) in her 1-2 years on earth. She had her gorgeous complete plume of a tail and a curved back (not flat like the breeders prefer), so she looked like an amateur breeder’s effort. They spayed her and let us have her 3 days later. She arrived with a gut infection, but whatever.

Dang. This little girl was shy. She loved the outdoors, and ran away a few times when she got out off leash. We left the door open, and she always came back–probably because we fed her. But inside: she didn’t know doors or stairs or sofas or anything about the inside of a house, and it all spooked her, especially anything flying near her, even a stick-shaped rawhide chew or treat. I forbade the boys (10 and 13–hey, it was time) to throw things inside the house. And she wasn’t house-trained. I spent months walking her outside to train her, and she slowly learned where we preferred the poop to go, though she never got that it was the ONLY place we wanted her to go… she still pees in the carpeted bedroom without a qualm. But let’s not dwell on that.  She adapted to our life, mostly.

Ron never did warm up to her, coming close to her only when they re-enter the house after a groomer visit or a walk to hump her to show his dominance. He still keeps his distance after 12 years, always sleeping in a separate bed, always a good foot away from her. But the dog dominance shifted subtly in the house. Taffy gleefully, heedlessly leaped onto my lap/bladder whenever she could, usurping his place. She seemed oblivious to his rules about being first in all things. She was (and still is) incredibly athletic. She LOVED her walks and when young, would jump as high as my shoulder–about 5 feet straight in the air–when we brought out the leashes. She was ebullient and fast and very playful. except around Peter. She hated Peter and ran from him (when he was standing) for 5 years, until my back got bad and I could no longer walk the dogs. When she started associating him with walks, her favorite things, she relented a little, but to this day, when the leashes come out, she will lead him a merry dance before finally submitting to let him put one on her. The girl just doesn’t trust a standing male human. Gotta admit. Maybe I don’t either. LOL.

She does, however, love to jump on and lick anyone who is lying down, and she adores any female any place, any time, especially if they visit and sit on HER sofa, the $1000 dog bed to the right of my typing station. It’s one of her safe spots in the house–along with my bed and the other sofa, if I am on it. Every place else is still a bit circumspect.

This dog has been with me through thick and thin. And there has been a lot of thick. I had a brain bleed in 2009-2010, which got fixed by 2 brain surgeries only after 9 months of undiagnosed hell. I didn’t have a lot of company as my health went wacky, and I spent a lot of quiet alone time–resting with the dog. She is a champion napper and nap buddy. She is my best friend in many ways. I don’t care how shy she is, or how small or insignificant or ridiculous she seems. She is an awesome and lovely nurse dog for me. 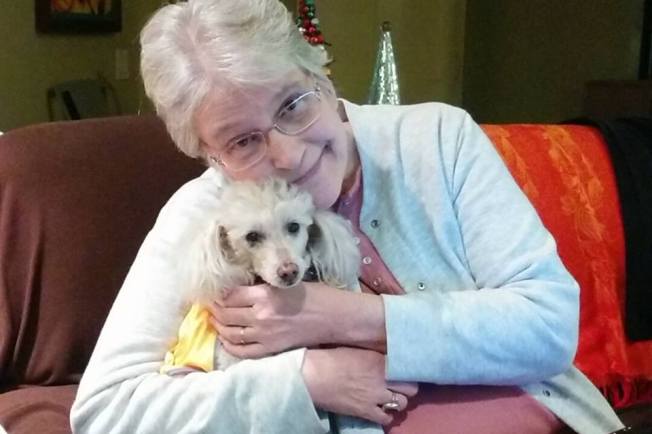 These days, she is 13 and a bit ill. In 2015, she was bitten by a coyote on a walk with me and Peter at night near my house. Oy chihuahua!!! The scare! God damned wild canines! She survived, and we’ve never used a long (retractable) leash again. Earlier this year, she had pancreatitis, along with an enlarged heart. She’s on 5 meds right now, for heart, gall bladder, and guts. We had to change her diet, and all of a sudden, this very steady eater has become a very picky eater, losing weight. She wants her accustomed cheese or ham bits, which the vets don’t allow. She’s gone from eating dry food with water or broth to canned food to another canned food back to the dry food, which she will now eat only if it’s served dry, and preferably thrown on the floor or offered by hand as if it were treats–even by my husband. I am worried about her. She can’t have gall bladder surgery, and this problem could take her down. I don’t want to lose my beautiful girl, but it looks inevitable. She’s still lively enough to take her evening walks, even if she eats like a bird. And she is truly my cherished baby. I will enjoy her silky fur and plumy tail and silly smile and strange, cat-like meowing as long as I have her. 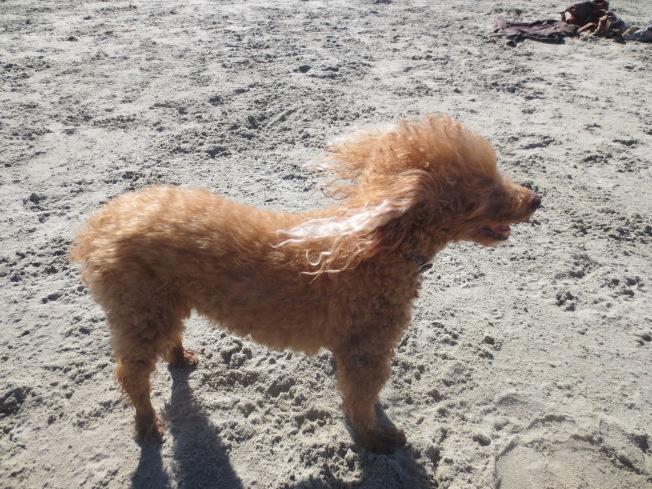 I have two dogs. One is a mini-poodle. He’s a failure of breeding—too tall to show at 12 inches at the shoulder—though his parents were champion toys. We got him in 2000, paying half price for a “pet-quality” animal. His name is Ronnie. Ronald Weasley Gettinger. Yeah, he’s red. At the time, we were reading Harry Potter on tape in the car on all long trips upstate, and who better to be named after than the best second banana in kid lit?

Ronnie’s a good boy. He learned the rules early and followed them. He looks like a stuffed animal with his shoe-button eyes, curly red hair, and alert stance, but he guarded the house from all and sundry with great ferocity for many years. He guarded us with great ferocity on walks. He took his job seriously—barking at every big dog he saw out the front door of our condo, which faced onto a big park where everybody walked their dogs. Lotta barking. Little Napoleon, that’s him.

When he was 5 ½ months old, one of my extremely intelligent progeny held him up high—and dropped him. This resulted in over $1300 worth of surgeries—one to pin the knee whose cartilage broke (and nip his balls off), and one to unpin it a year later when it had healed. He got to be walked in a stroller for a month. He hated it.

This dog has served us faithfully for 16 years now, and continues to do guard duty on the sofa arm by the front door when we leave, watching for intruders. Though now, when we come home, he chews us out at high volume (because he’s deaf) for five minutes for being gone SOOOOOOOOOOOOOOOO long and leaving him in charge all that time. The rest of the time, he sleeps really hard and has trouble climbing the stairs. At age 14 or so, he took to sleeping on our bed with us, a no-no in days of yore. But he makes his own rules now. He is the oldest one around, after all—past 80 in dog years. (Actually, he’s the equivalent of an 80-year-old person, so it should be called people years, don’t you think?) I’m not aure I agree with all his rules, especially when he decides it’s OK to poop in the house. 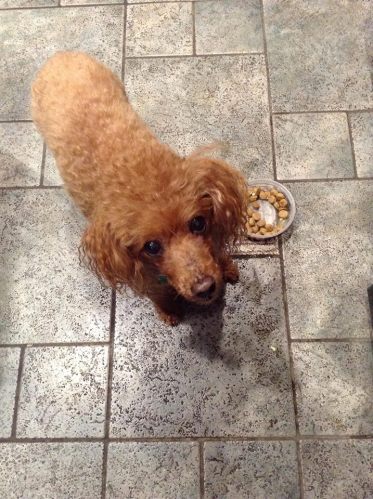 Where is the egg you promised me?

These days, his bluster is pretty well gone. He’s motivated by one thing. Food. Many different kinds. Plus snacks and licks of dirty dishwasher items. His taste changes with the wind, going from Hills W/D dry to Royal Canin canned to Hills I/D canned back to the W/D. He might need chicken or fish or beef or cheese with that, as well. Or an egg. He thrives on variety. I wish he spoke English, or at least read it, since he’s ordering off the menu, and I need to know how to cook that egg. 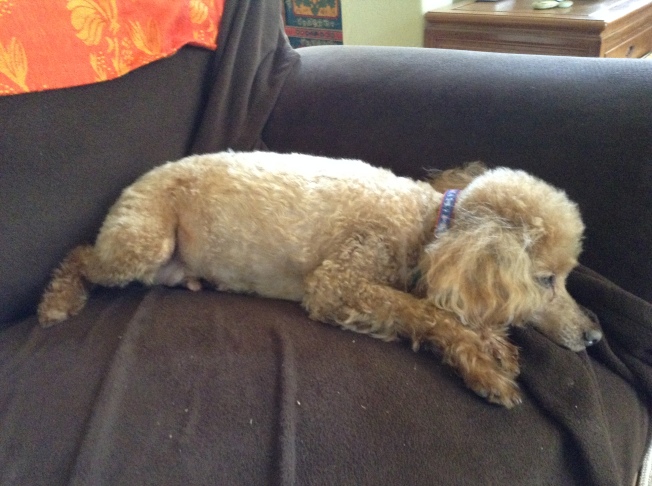 All his (considerable) vet bills have been related to the early leg break and later muscle strain and joint pain. He’s a real Energizer Bunny, except on walks now, when he pulls toward home the whole way—backwards for the first half, forwards for the second. Hey, he knows the route. Because of his size (10-11 pounds max) and his utter cuteness, some might label him a “near-dog” or a “pseudo-dog,” but he’s quite sure that he’s very large and imposing and important. And he is. He’s the military arm of the household. We salute him. 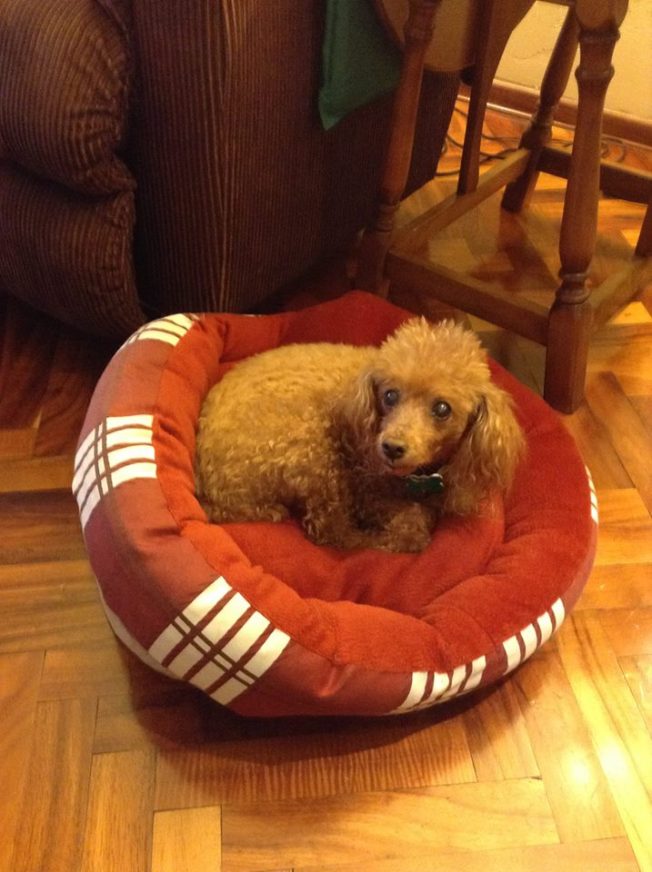 Don’t talk about how stinkin’ cute I am. I’m busy guarding the house. Can’t you see?